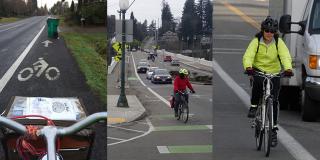 In 2019 the Washington State Legislature passed the Vulnerable Road User law. The law, which went into effect on January 1, 2020, defines “vulnerable road users,” their rights and responsibilities on the road and how people driving motor vehicles may overtake and pass them. It also allows for added fines for drivers who commit certain traffic infractions impacting a vulnerable user, and creates the vulnerable roadway user education account. The additional fines are deposited into the account and are used to educate law enforcement, the judiciary and the public about the law.

A "vulnerable user of the public way" means a pedestrian; a person riding an animal; or, a person operating a farm tractor, bicycle, electric personal assistive mobility device, moped, motorized foot scooter, or a motorcycle.”

For drivers, the part of the law relating to passing bicycles can be summarized as:

Other parts of the law relate to common traffic infractions that are particularly dangerous for people on bikes and other vulnerable users.

Following Distance and Yielding Right of Way. If a vehicle follows too closely or fails to properly yield the right of way to a cyclist or other vulnerable user at an intersection, when turning left, at a stop sign, or when entering a roadway, the driver may be fined an additional penalty.

Operating Bicycles on the Road. Generally, a bicycle must be ridden as close to the right side of the right lane as is safe. When operating on a road with one lane for traffic moving in the direction of travel that can accommodate both a bike and a motor vehicle, the cyclist must ride far enough to the right to allow vehicles to overtake unless conditions make it unsafe or if the cyclist is preparing to or making a turn. On one-way roads with two or more lanes, a cyclist may ride on the left side of the left lane.

The law provides additional circumstances under which a cyclist is not required to ride as far on the right side of the lane as is safe. These include: